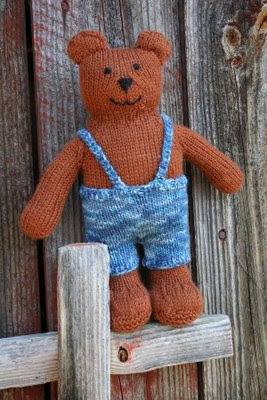 This bear is knit in one piece , from the toes up. The only seams will be on the top of the head, and on the ears. A pair of suspender-held pants is knit separately.

The bear had been knit out Vuorelma "Veto" yarn which is fairly light weight (sport weight). The yarn you use will determine the finished size of the bear. Using the yarn Novita " 7 Veljesta" the bear would be about 36 cm tall. ( Aran weight)
The bear and the pants will fit together well if you use similar weight yarns for both. The brown bear in the photos is made from "Veto" yarn, the white bear from "7 Veljesta". The white bear is a little bigger than the brown.
Yarn
Vuorelma Veto (85 % wool, 15 % polyamide, 100 g / about. 260 m), 100 g red-brown (310)Novita Nalle Colori (75 % wool / 25 % polyamide), 150 g variegated blue (860)
Gauge
22 stitches and 32 rows in stockinette stitch with "Veto" yarn = 10 cm
Needles
Double point 3.5 mm or as needed for your gauge (note - Finns knit with a set of 5 dp needles)
Other materials
Small amount of black yarn for embroidering the facial features; fiberfill for stuffing
Size
The bear is around 28 cm tall (this is for the lighter weight yarn)
Note!
When you have knitted the legs and some of the body, finish the yarn ends on the legs and stuff the legs. When you are attatching the arms, add more stuffing to the body. When you reach the decreases for the neck, stuff the arms. This way it will be easier to stuff the bear and to shape the limbs.Add the stuffing in smaller pieces, so it does not get lumpy. Add extra fiberfill to the tummy and bottom areas, and to the muzzle area on the face.
Directions
Legs 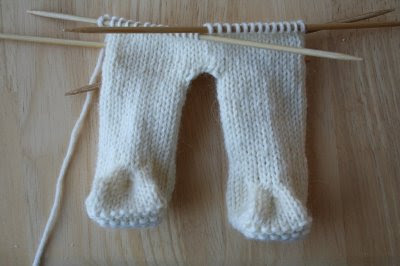 To attach the legs, cast on 3 stitches between them on both front and back, (=54 st). Knit in the round for 26 rows. (rows start in the center back) 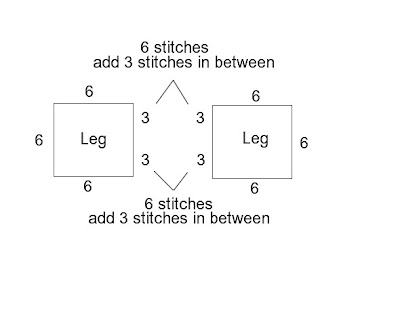 On the 26th row, cast off for the underarms, 2 stitches on both edges. End the row in the center back, cut the yarn and place the stitches on a
holder.
Arms
Cast on 4+4 stitches onto 2 needles using the figure-8 cast on and knit 1 row. Next row, begin the increases: k1, increase, k2, (place a stitch marker
between these stitches to mark the start of the row), increase, k1. Knit the other needle in the same way. Continue increasing on every needle, until there are 10
stitches on each needle. (The increase will be 1 stitch away from the edges - ie, k1, increase, knit to last stitch , increase, k1). Add needles to the work as you are
increasing, ending up with 4 needles with 5 stitches on each. Knit in the round for 7 rows.
Next, decrease as follows: *k3, k2tog*. Repeat from * to * for all needles. (=16 st). Then knit in the round for 20 rows. On the last row, decrease 2 stitches from
the underside on both arms, and place remaining stitches on a holder.
Repeat for second arm.

Join the body and arms onto the same needles. (=78st) and knit 1 row. At the same time, move the beginning of the row to the center back, placing a stitch marker. 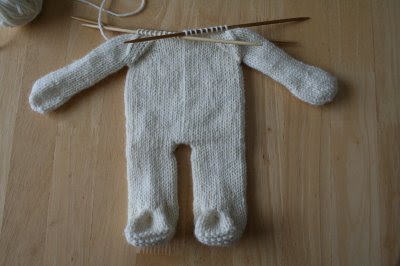 Find the centermost 5 stitches of the face, place markers. These are the stitches shaded in grey on the chart. Knit the 9 rows of the chart as directed , knitting in the round. (You will knit stitches not marked on the chart as well each row). At the end of the decreases for the muzzle (charted), you will have 38 stitches.
After the muzzle, knit 9 rows, then start on the decreases. The beginning of the row is in the center back: knit 2tog at the end of needle number 1; slip knit pass slipped stitch over at the start of needle 2. Knit 2tog at the end of needle 3, skpsso at the start of needle 4. Decrease every row until 22 stitches remain. Cast off stitches, which leaves the top of the head open for stuffing. 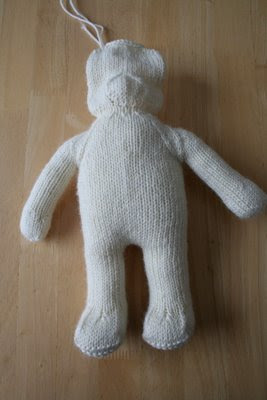 At this point the bear will be mostly stuffed, with the exception of the head. Stuff the head partly, placing extra stuffing in the muzzle area so it is slightly raised from the rest of the head. Once you have a defined shape to the face, embroider the nose, mouth and eyes with black yarn. Place extra stuffing behind the embroidered areas so the black yarn does not show through when making a light coloured bear. Stuff the head completely, and sew the opening shut.
Ears
Cast on 20 stitches , divide evenly onto 4 dp needles, and knit in the round for 3 rows. Next row, add 1 stitch onto each needle as follows:
Needle 1: k4, inc, k1
Needle 2: k1, inc, k4
Needle 3: k4, inc, k1
Needle 4: k1, inc, k4
Knit 1 row, then start decrease as for top of head: k2tog at the end of needle 1; sk psso at start of needle 2; k2tog at end of needle 3; skpsso at start of needle 4.
Do these decreases 3 times, cut the yarn and thread it through the remaining stitches. Make second ear the same way.
Stuff the ears and sew them onto the head. 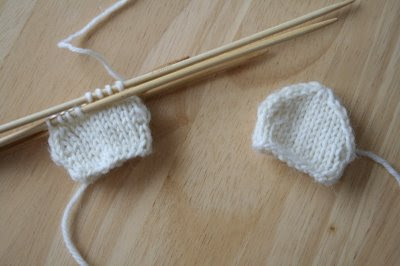 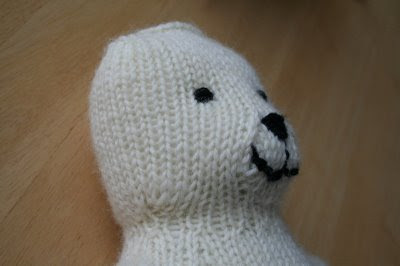 Cast on 54 stitches ( divided onto four needles : 13, 14, 13, 14) and work k1 p1 ribbing for 3 rows. Continue knitting knit rows for about 5 cm, or until the work
reaches the crotch of the bear.
Divide the stitches in half (13 + 14, increase 1 stitch so you have 14 +14) and knit the first pant leg. Knit for approx. 1/3 of the length of the leg of your bear, then
knit 2 rows of k1,p1 ribbing. Cast off.
Knit the other pant leg the same way.
Pick up 3 stitches from the front waistband, and knit garter stitch on 2 needles (working flat) until the suspender reaches across the back (see photos) and cast off.
Make second suspender strap the same way, then sew both to the rear waistband. 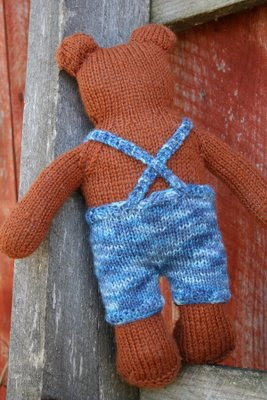 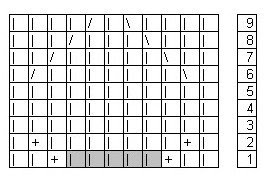 l knit stitch
+ make a stitch from the loop between two stitches
/ knit 2 together
\ slip , knit. pass slipped stitch over